The objectives of the Avicultural Society of America are the study of foreign and native birds; the dissemination among the members and public of information for the care, breeding and feeding of birds in captivity; the perpetuation of species that are threatened with extinction; and the publication of matters pertaining to aviculture.

Brief History of the Avicultural Society of America

The Avicultural Society of America (ASA) was originally founded at a meeting in New York City, October 19, 1927. Approximately thirty budding bird breeders formed the first membership roster. Meetings were informal and without elected officers until the Society elected William Browning, a Californian, as the first president in 1929.

As the group grew in numbers and support, it was able to start its own publication in January of 1929. They called it “the Bulletin.” During these beginning years, it became evident that California was showing the most interest and progress in the field of aviculture. As more members joined from California, a chapter of the Avicultural Society was formed in Los Angeles. Early in 1934 the Society transferred itself from New York City to Los Angeles. By this time the Society was 408 members strong.

Today, the Avicultural Society of America is the most prestigious and venerated Avicultural organization in the United States. Still headquartered in southern California, ASA boasts members across the United States as well as in other countries. “The Avicultural Bulletin” has been published by ASA since 1929. Over the years, the Bulletin has been filled with the writings of the most successful and innovative curators of birds at the leading zoos, the best birdkeepers in the private sector and even a few privileged individuals such as the Duke of Bedford and the great Dr. Jean Delacour. Today, similar people write for the Bulletin. It contains an unmatched mix of historical data and the most advanced methods and ideas in aviculture. No matter what kind of birds, be they finches, parakeets, pheasants, parrots, penguins, eagles, ostriches, ducks, quail or any other kind of bird, the ASA offers tried and true methods regarding how to keep and care for that bird and probably how to breed it, too. That’s because members of the ASA are currently keeping and breeding virtually every type of bird found in aviculture.

ASA members meet monthly in Southern California to listen to experts talk about birds and share knowledge on their care. The public is welcome at ASA meetings, free of charge. Perhaps most important of all, ASA does things that are good for birds in the wild as well as those in aviculture. Conservation programs are supported by our fundraisers, and consider species such as the Scarlet-chested Parakeet, the California Condor, the Black-hooded Red Siskin, the Nene Goose and many others where, due to successful avicultural techniques, there are probably more individuals in aviaries than exist in the wild. Aviculturists have saved these species from almost certain extinction and many of our members’ birds have been used in reintroduction efforts in the wild. 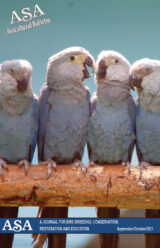