The Galah (also called Rose-breasted or Roseate Cockatoo) Eolophus roseicapilla is the most common cockatoo in Australia. Indeed, contrary to other cockatoo species, the Galah has had something of a population explosion over the past century and is still growing in numbers and is expanding its range – quite a remarkable feat when considering how most of the other species are in dire declines.

The Galah has the facility to adapt to man’s changing of the landscape. The birds are thriving and expanding their range where farmers are cutting forests and expanding their agricultural holdings. Man, it seems, has become the provider for the Galahs. These birds are smart enough (and fearless enough) to “come to the banquet,” if you will, of great fields of grain. Current research, however, suggests the birds are more beneficial to the crops than the farmers first assumed. It is still necessary that farmers don’t leave fields of ripe sunflower, for instance, standing extra weeks before harvesting. The Galahs will often devastate these fields. But where farmers are learning how to improve growing and harvesting techniques, the birds are less and less a problem. The species is protected but in certain areas and at certain times, farmers can get permits to protect their crops by shooting the birds.

Not only in the agricultural lands are is the Galah population expanding. The birds have even invaded urban areas and large cities. Joseph Forshaw, (Australian Parrots, third revised edition) says “I witnessed much of the colonization of the Souther Highlands of New south Wales during the 1960s and 1970s. In this region, mountains are interspersed with valleys and hill which were cleared and opened up for grazing or cultivation of cereal crops, mainly oats. Galahs moved into and established themselves in these open areas and are now among the most common birds, even nesting in trees in urban gardens and parklands.”

In all, Forshaw has about three large pages recording how this species has profited from man’s exploitation and development of the land. A very adaptable bird, indeed.

He begins his take on the Rosy saying, “From the avicultural standpoint, the Roseate Cockatoo possesses a great many virtues and some failings. As a talker it seldom has much merit, though a hand-reared bird may learn to say a few words. Like nearly all cockatoos, it can, when excited, yell distractingly and if kept in an aviary no unprotected woodwork will long survive the attacks of its beak. On the other hand it is easily tamed and becomes devotedly attached to its owner, females being often so gentle as to allow even strangers to handle them with impunity.”

Good old Tavistock (who upon the death of his father became the Duke of Bedford whom you all should know) goes on the describe breeding the Roseate Cockatoo,  “…there are few foreign birds which nest more readily with suitable encouragement, In a 24 ft. by 8 ft. aviary I have bred Roseates without the least trouble. They lose no time about settling down and a rough-plumaged wild hen imported in mid-winter will be rearing young the following July. They are not particular about their nesting sites, using either a barrel or a natural tree trunk. In the wild state the birds are said to lay four or five eggs and to line their nest with green leaves. In captivity two or three eggs are the usual clutch. The hen does most of the sitting but her mate relieves her when she comes off to feed.

“The male and female Roseate are a very devoted couple throughout the year and even when the breeding season is over it is a pretty sight to see the hen walk up to her mate, lean across his breast and gently preen the further side of his neck while he lovingly fondles that part of her person which happens to be within most convenient reach.”

Alas, gentle readers, the Duke is gone, and such graceful writing as his is seldom seen these less gracious days. More’s the pity. 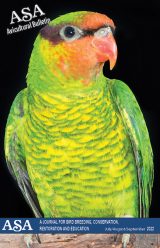